How do we figure out who is paying for political ads?

It’s election season again, and that means that there are ads in the mailbox, a deluge of ads on the television, and more candidate ads on social media. But who is responsible for these ads? What do they want?

Let’s take some time to judge the ads and follow the money! First, let’s look at the “disclaimer” that explains who paid for the ad. This will tell you whether the ad is paid for by the candidate, a political party, or an organization. This Judge Doe ad was paid for by “Ohioans for Serious Justice” so that we know that the candidate’s campaign didn’t pay for it. But who are the “Ohioans for Serious Justice?”

If the ad is paid for by a candidate committee, political party or political action committee (PAC), you can find contributions and donor information on the Ohio Secretary of State’s website.

This ad clearly wasn’t paid for by Judge Doe’s campaign. Search engines can reveal an enormous amount of information, but some organizations are less than transparent.

It’s sometimes hard to track the source of some commercials or political ads. That’s because in 2010, the U.S. Supreme Court determined in Citizens United v. FEC that corporations have the right to pay for political ads as long as they aren’t coordinated with candidates. Under law, corporations cannot contribute to candidates but the court determined that corporations–including nonprofits–have First Amendment rights. Because corporations are worried about their bottom lines or adverse reactions, they often prefer to shield their identity. While disclosure is constitutional, the Ohio General Assembly and Congress have failed to pass good disclosure rules. Wealthy individuals sometimes prefer to operate in secrecy. This has led to the creation of nonprofits such as 501(c)(4)s making “following the money” much more difficult.

Because they don’t have to file with the Ohio Secretary of State, it can be hard to figure out who is paying for the ads. This is often called “dark money,” or secret money, in elections. Dark money groups can give to other dark money organizations, further complicating the ability to “follow the money.”

The Brennan Center for Justice at New York University’s Buying Time project has been tracking political ads in judicial races for more than 20 years. It has become increasingly difficult to identify who is paying for these advertisements.

Check out ads in the Ohio Supreme Court 2022 Races “After Roe” Ad from Forward Justice “The Law and Order Candidates” mailer from the Ohio Republican Party Ohioans for Justice and Integrity’s Right to Choose ad 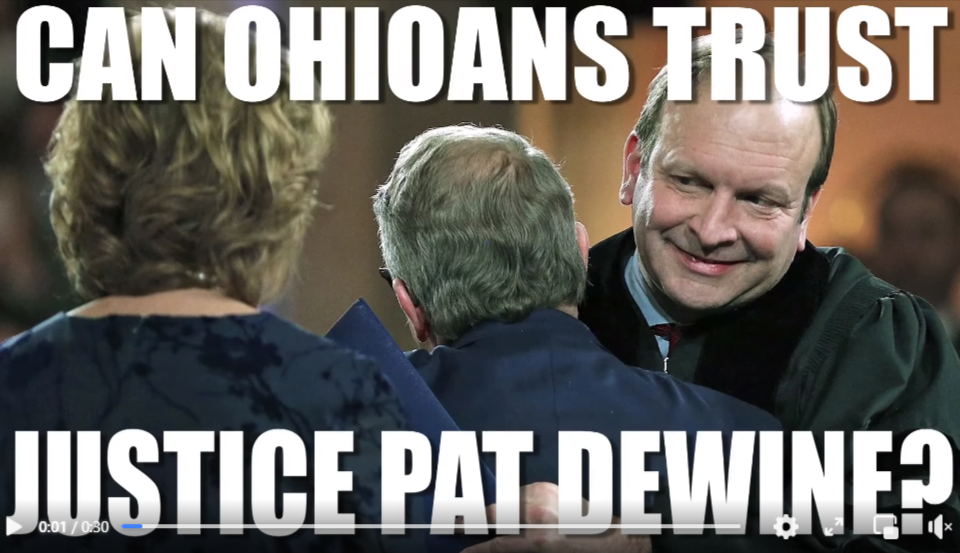 “Can Ohioans Trust Justice Pat DeWine” from the HEAD PAC

Send us the Ohio Supreme Court political ads that you see
If you have seen an ad, please let us know by emailing us or filling out this form.